What do you learn when you consider this landscape as it once was?

Hard to say, but I thought there was something worthwhile in the consideration of that idea, as there I was, on a cold and showery Saturday morning, joining perhaps thirty others, to watch the launch of a series of heritage signs at a local beach: the appropriately named Fossil Beach, ten minute walk from my home, and a place I’ve written about before.

What did we expect I wonder?

We saw signs unveiled and launched, and we heard first-hand, the stories of the family who excavated this place. Those who told the stories were children then and returned to the place. They told of regular weekends spent unpacking the debris of the past.

We heard of the shifts in the earth that sent this place askew, pushing fossils out of the base clay, the layer called Balcombe clay, and how few places there are where you can see the evidence of how such things happen.

We heard of the indigenous people who live and ate here and walked these tracks and of the shells they left in heaps through the thousands of years of their passing. We heard how their oral history of a great flood matched the geological records of the bay filling, a thousand years ago.

Then, with settlement, industry; a short-lived cement works whose remnants lie in broken stones intriguingly half-hidden in the bush; this is progress you might be seduced into thinking, putting these stones together which have already gone to pieces.

Later, we heard of a young woman artist who painted the ruins of the cement works, a Romantic gesture like Wordsworth’s salute to the ruins of Tintern Abbey. She was eighteen, taught and influenced by the colonial artist Eugene von Guérard. An expert talked lovingly of the perspective and the frame; she’d spent months researching the provenance of the frame; what Melbourne company might have made this.

What do you learn from all this? Maybe you learn about the layers. First the primeval. The geological, the tectonic.

Then indigenous, their stories of the Bay as a great, open swampland, before the ocean rushed in, that ancient memory story, now backed by scientists.

How quickly progress became nostalgic in the art of the ruined romantic landscape.

And, finally, stories of the near-present, the place bordered up with warning signs and cyclone fencing, for years you couldn’t get in.

We listened to the speeches with rain coming in bursts from over the bay. Looked at the arrangements of rocks and the place where the tower was. A month later, and two of the fresh new heritage signs have been ‘tagged’ by some teenage vandal eager to leave his incoherent layer to all this as well.

It’s been a recurring thread for me in my writing and thinking: the idea that there are things hidden or buried, or forgotten and still intact beneath the surface of things. It’s there in some of my earliest writing, the very title of my first collection, Lost Things, and in images like the abandoned picnic place, the lost highway, Atlantis etc.

So, of course I’d be fascinated to see, last Friday when I walked to the beach after a busy week at work, the fragments and wreckage of past structures that had emerged over the winter at my local beach.

I’d seen glimpses of early constructions before; perhaps a pier, or foundations for a jetty of some kind, but nothing like these full and intact structures that had been beneath my feet all along, all these years.

I took these photos to preserve them, before they’re buried again. 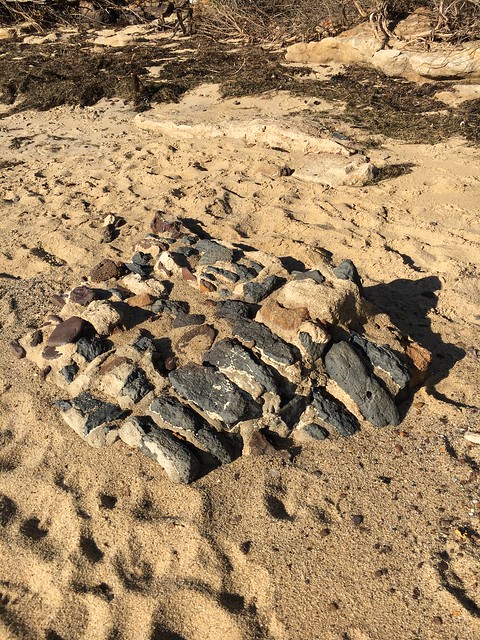 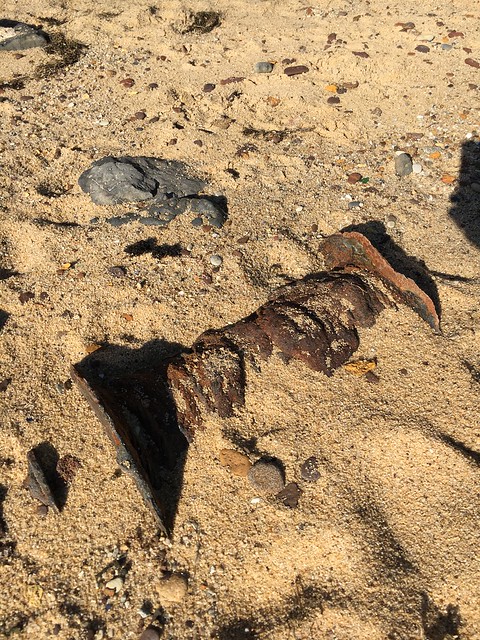 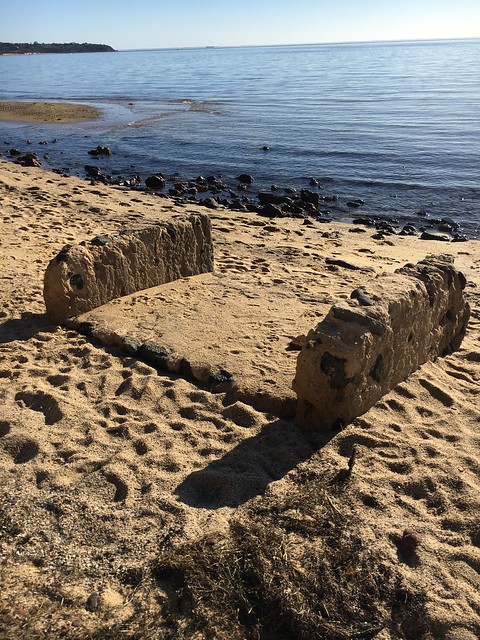 another experiment with the Adobe app; this time with multiple images