I’ve been looking at ways of presenting text online in more interesting or diverse ways. Nothing wrong with black text on a white page, but nice also to think of other ways to present and share text, with images as well. This is a new poem, using the app Adobe Spark I would have liked an embed within the blog, but the image below, which I found on Flickr, links to the poem and image as hosted on the Adobe site.

I was pleased this morning to receive in the mail my copy of Our Home is Dirty by Sea, a new collection of ‘Australian poems for Australian kids’, published by Walker Books, and edited by Diana Bates, which includes my poem Immigrant House.

Immigrant House recalls my experience growing up and entering the strange European interior of a friend from school. It was published in my first collection Lost Things,  and I’m pleased that it’s likely to find a new (and younger) audience here.

I was delighted today to attend the launch, and read a poem, from a new collection called City of Stars, an ‘anthology of love poems for Frankston’ edited by Avril Bradley.

The new collection is published by Gininderra Press and features poems from Garth Madsen (the unoffical poet laureate of Frankston), Jennifer Compton, Ann Simic, Glenn Harper and others.

I was fortunate enough to have three poems included in the collection: Beginnings, The Day it Snowed in Frankston and The Wedding Train, about the train journey on the Frankston line, loosely inspired by Philip Larkin.

I read the one about the day it might have actually snowed in Frankston, inspired by a story a student named Eloise told me a long time ago.

It was good to hear some of the poems being read aloud, and to get together to celebrate a place that seems an unlikely catalyst for poetry at times. In praise of place.

You might be able to get a copy of City of Stars from local bookshops like Robinsons.

Frankston can get some bad press at times. Like many regional centres, especially at the end of the railway line, it has its share of problems: youth unemployment, drugs, crime and all that comes out of that.

But there’s another side of Frankston too; it was once a sleepy seaside holiday town, with a long, sandy beach and a meandering creek wandering by the shoreline. You can even read a passionate defence by the Mayor of Frankston HERE

I grew up in Frankston and though I haven’t written about it a lot, just a few poems now and then, it’s part of who I am. In my writing, my interests have moved further south, to Port Phillip Bay and Western Port Bay particularly.

But I was delighted to be asked to contribute to a forthcoming anthology of poems about Frankston and I can’t wait to see how other writers have responded to this place. I think I’ll have a couple of poems in the collection including, The Day it Snowed in Frankston. More details when I know more about a launch date. 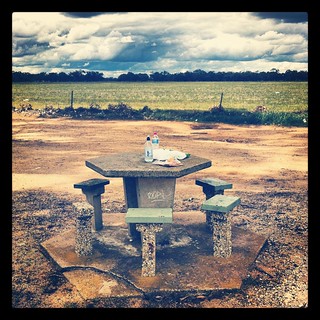 I’ve always been fascinated by those places that time and history has passed by: Industrial archaeology, the stone circles of Celtic Europe, or the smaller, more intimate places, derelict houses or picnic places that have been by bypassed and abandoned.

Near where I live, and cycle regularly, there is a short stretch of the highway that was diverted off perhaps thirty years ago now and replaced by a newer streamlined bit of more modern cornering. The original stretch of highway, that we used to travel on as kids, maybe 400 metres or so long, was just cut off and left to grow over.

Sometimes, riding in the area, I like to take that old detour and explore that old niche. Included in the off-cut was a roadside picnic table and stools, now being overgrown in grass and emerging saplings. Here, I like to think, families would pause in their travels, unpack a thermos and some sandwiches and take a rest. I blogged about it already in 2011 in a post about The Lost Highway.

It’s still falling apart gently. And, I was reminded of it recently when I saw a recent article on WebUrbanist about 150 Vanishing US Rest Stops, which a photographer had been documenting. An admirable project I thought. I heartily approve.

Below, another photos I’ve taken over the years on that theme, a drawing and a poem too. Seems that these ideas keep bubbling up in lots of versions. 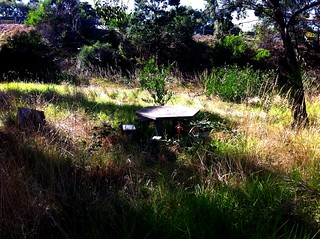 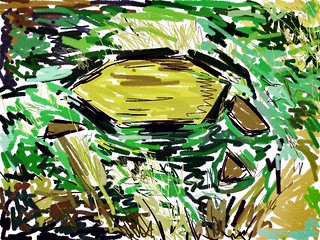 I walk from the swings and the families,
their wine glasses and picnic plates
their kids racing to the jetty,
the last sun shining in their hair,
someone putting on a jumper against the cold.

Up ahead, up river somewhere,
I can hear the beating of wings.

I caught up with a lot of surfers yesterday at the 40th anniversary of the Peninsula Surfriders Club; a surfing club I joined in Year 12 in 1974. I don’t surf much these days but it was great to meet up with some faces from the past and to hear how many are still surfing, lots of them seeking out warmer climates now that the old bones don’t enjoy the cold waters of the Mornington Peninsula so much.

I’ve always thought surfing was more than just something to do at the beach when it’s hot. Maybe more than a sport.  When I was surfing a lot, I wrote about it a lot too, not so many poems but stories, articles, journal entries, trying to understand it all. I’ve got still a eighty page poetry sequence sitting in Scrivener waiting to be turned into an ebook, or a major section of some larger book someday. Maybe I should get back to that.

One of the surfers told me about a journal they liked called PaperSea, which looks part-travel writing, part surf-writing, photography and counter-culture.  Looks interesting, and good to see others interested in the subtler nuances about surfing and the sea. They write:

Creative men and women with an appreciation for hand-crafted quality will find honest stories and critical pictures about surf, travel and art from the world over.

We saw the need for a creative alternative and so we present to you a quarterly book for people who share our affinity for the ocean, creativity in its infinite manifestations and the thrills and perils of travelling amongst far away cultures.

Full-bleed images by the world’s best minds accompanied by their stories behind the moments are set alongside in depth interviews and stories. We are publishing first-hand experiences as we explore not just the beaches but also the cultures of far away countries.

It made me go back to my own work too, and see what about surfing was there already. This poem, from my collection The Colour of Maps, probably owes as much to Gerald Manley Hopkins as it does to the waves, but celebrates an early surfing moment:

The Waves in the Bay

These fine light pulses
flicker across rippling sand,
perfect solids, half-lit wedges,
tubes unravelling continually
like pvc, along a precise depth of moment
and the spilling forward motion
is thrown out and over along an angling
vortex, punching out air like engines minutely,
crackling like small arms fire
along calf-deep edges
of sandbank promontories.

Or, on still days,
with the bay
stretched taut as glad-wrap,
wrinkly, oily looking,
and strange sets,
yes waves arrive in sets
like Meccano, assembled,
dark stacked mounds of water
appearing from somewhere abruptly,
unexpectedly complete,
the bow waves of some great tanker
that passed by ages ago, perhaps,
or merely the sea itself, its slow stretching
sending children skittering
from their floatables, new water
running up the smooth sand,
lapping at towels briefly like affairs,
the old tales of the seventh wave
that sinks ships: ask sailors about it.

And then, that perfect day, the miracle,
when, after the strong wind had finally
transformed the bay’s wayward cross-chop
into lines of swell that darkened
and caved out of the cold depths like bears,
the wind swung around, and while the pulse still beat
strongly in for an hour, fading at last by degrees,
with the sun,
those perfect waves
pushed still against an offshore,
smoothing before our amazed eyes,
these natural things becoming startling,
in surfing dreams come true at last
in the temporary crossing of energies.

And as they beat, still more faintly
from the yellow sunset
and we turned for home,
they were already depleted,
and we, rubbing the salt from our eyes
as if in a dream,
could already barely recall
the moment at all,
or the first fine lace spray
off an offshore in the bay.

Most of the year for me is spent split between working in Melbourne and getting down to the Mornington Peninsula on weekends.

So, one of the things I like most about the holidays is the chance to be in one place for a while, and re-connect with some of my favourite places like the Briars.

I’ve blogged about the Briars before (do a search if you like) but I never get sick of the place, and the way the creek defines it as well as its sense of history.

Today I did the longer 4k loop and also walked out via the new Harrap Creek track for the first time. I’ve captured some of the moments below, but one moment I didn’t capture was seeing a big red-bellied black snake asleep by the side of the track. The trouble is, once you’ve seen a snake on a walk, you see them everywhere, in every shadow, root, branch or piece of broken bark on the track or just off it. It tends to take the meditating mind off the poetry a bit. Though, it did make me think, ‘have I ever written a poem about a snake?’, like D.H. Lawrence did? Looking back, it seems I have only had one go at it, this poem that was published in *Eureka Street* in 2011. Maybe it’s time for another go?

Rows of trees knee-deep in bracken
trunks green with soft moss
all dead or dying
a shovel shaped pit
the sound of water
some Mirkwood path
to a wide green place
where a house was
all ruined
broken rocks and bricks,
beside the broken oak tree,
a non-allegorical snake.

Below: The view from the bird hide

The prophetic sign: this was exactly the snake I saw half an hour after reading this sign.

Signs of former use; old fence posts from when this was farmland.

Below: Balcombe Creek
Nice to see it flowing after a bit of rain this week.

Below: Spring Paddock Dam
Listen carefully for the frogs.