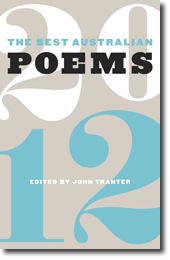 I was delighted to hear recently that a poem of mine called ‘Hands’ has been selected for inclusion in Best Australian Poems 2013, published by BlackInc. John Tranter is editing this year’s collection and writes on the BlackInc website:

‘I was struck … by just how many poems depended on the ancient devices of the storyteller … Many have a lyrical or meditative feel, but most have a story to tell, captured in a brief glimpse of the meaning of life, or a dramatic climax.’—

I’m really pleased because the annual BlackInc collections are so impressive; they do an annual one on poems, essays and stories. Long-time readers of this blog will know I was featured last year too.

You can read more, and look at lists of all the contributors here: http://bestaustralianwriting.com.au The books will be available in hard-copy and digital form from November 5th and make fantastic Christmas presents!

My poem, The Station of the Stairs was inspired by the wooden steps up from Bird Rock Beach to the highway. I’ll put it online sometime over the summer. The book is $24.95 and I think it’s out now.

Below: The Stairs, Photo: Warrick

I like John Tranter’s poetry. Sheesh, he’s twice won my Warrick Poetry Book of the Year Award! But, in the discussion between him and Dennis Haskell reported in Australian Poetry (AP) recently, I guess I’d fall in line with Haskell’s belief. Not that I’m against modernism, but Haskell’s definition of what poetry is, sits more closely to what I understand poetry to be, and trying to be. AP reported:

At the Perth Writers Festival this year John Tranter repeated the idea about poetry he has consistently adhered to, “If you want to communicate, use the telephone”. While John has taken it from modern American poets, it’s an idea that dates from the period of Modernism, one hundred years ago. I want to argue that it’s a form of giving up, and that poetry’s most important role is still the traditional one of communicating a combination of deep emotion, complex thought and a spirituality that often seems to lie just outside the reach of language which constitutes the deepest expression of meaning available to humans. Since Modernism people have run away from poetry to the telephone, and the most urgent need of contemporary poetry is to get them running back.

It’s lofty, recklessly ambitious, even old fashioned but those words, ring true with me a bit:

Poetry is about “communicating a combination of deep emotion, complex thought and a spirituality that often seems to lie just outside the reach of language which constitutes the deepest expression of meaning available to humans” Haskell.

You can read more on the AP site, but you’ve got to be a member and I recommend anyone with a strong interest in poetry to join up. I wonder, what’s the best definition of poetry you’ve heard?

John Tranter posted this retort to my Feb 24 posting of Dover Beach and I thought it was too good to leave buried in the comments. It’s by American poet Anthony Hecht.

The Dover Bitch: A Criticism Of Life

So there stood Matthew Arnold and this girl
With the cliffs of England crumbling away behind them,
And he said to her, “Try to be true to me,
And I’ll do the same for you, for things are bad
All over, etc., etc.”
Well now, I knew this girl. It’s true she had read
Sophocles in a fairly good translation
And caught that bitter allusion to the sea,
But all the time he was talking she had in mind
the notion of what his whiskers would feel like
On the back of her neck. She told me later on
That after a while she got to looking out
At the lights across the channel, and really felt sad,
Thinking of all the wine and enormous beds
And blandishments in French and the perfumes.
And then she got really angry. To have been brought
All the way down from London, and then be addressed
As sort of a mournful cosmic last resort
Is really tough on a girl, and she was pretty.
Anyway, she watched him pace the room
and finger his watch-chain and seem to sweat a bit,
And then she said one or two unprintable things.
But you mustn’t judge her by that. What I mean to say is,
She’s really all right. I still see her once in a while
And she always treats me right. We have a drink
And I give her a good time, and perhaps it’s a year
Before I see her again, but there she is,
Running to fat, but dependable as they come,
And sometimes I bring her a bottle of Nuit d’Amour.