One of the things that interested me about the Sebald film I saw last week was the mapping and the way that one of the researchers was plotting the Sebald walk on something that looked a lot like Google Maps. I liked the idea, and had already been toying around with the idea of mapping some of my poems and where they are set; a bit like the way Instagram is now mapping photos you upload.

In my looking around I can see there are quite a few projects that are into mapping literary places: for tourists who want to walk the walks of Wordsworth (like I do!), for historians, for students and teachers and just for the fans.
One interesting one is Google Lit Trips, a nice tool for teaching some literature.

I intimated in my earlier post about this local history by Winty Calder that the cover didn’t really do the text justice. So, I’ve included here a couple of the maps from the book. There’s also a lot of really interesting photos, but I must admit there’s something I find terribly attractive about these old maps: their typography, their line-engraving look, even the parcelling up of the bundles of land.

Better version of the two maps I posted about last time f rom The Land of the Lowan. 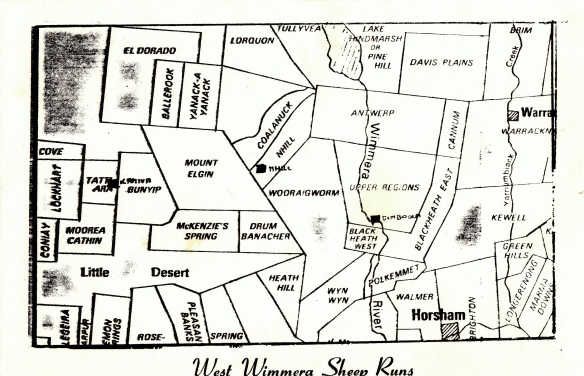 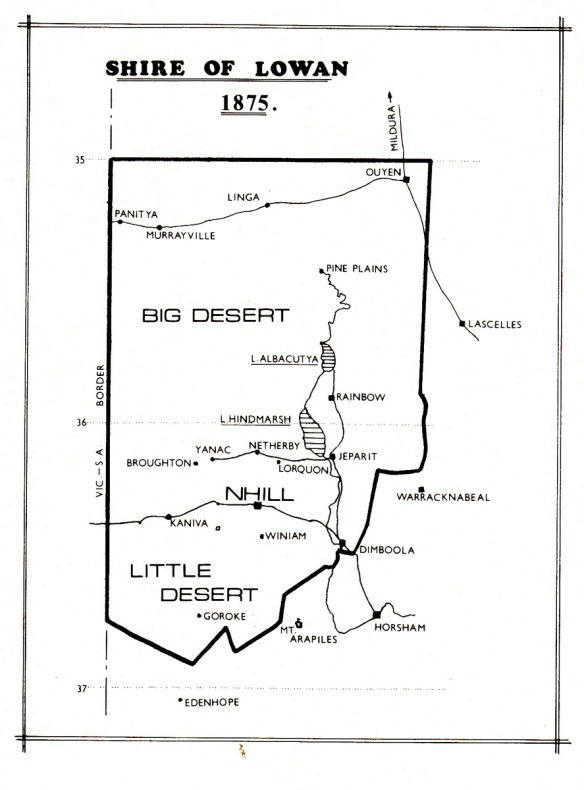 I thought I’d share a couple of maps from the afore-mentioned The Land of the Lowan, which I liked a lot. Mainly because I like maps I suppose, and the vast spaces left blank in these maps of the Western District. And also, because one in the form of a photocopied? extra sheet slipped into the book after the printing was complete.  They probably deserve better scanning than me snapping them with my Iphone, and I might do that later on.

By the way, my edition has the handwritten dedication: ‘With the compliments of Nhill and District Historical Society. F. Bound. President.’

The Society has a web page here and I contacted them to find out more about the book.  Frank Bound himself wrote a book a bit later called Nhill’s fabulous century: a pictorial record of Nhill’s first one hundred years, and I’ll keep an eye out for that one too.

Oh, to be in England, now that the British Library Magnificent Maps Exhibition is about to open this week. It’s reviewed by Jonathan Jones in the Guardian HERE.

Attentive readers will know how much I love maps, and this exhibition features maps that  have rarely been show before, with a focus on the map as an instrument of power and propaganda. I’m ordering the catalogue, but I’d love to be seeing these maps in real life. If you’re in London, get along!

A friend pointed me to this beautiful article by Nicolas Rothwell that appeared in the Australian early in January. Rothwell writes well about landscape and I enjoyed his book Wings of the Kite Hawk, which is described here at part memoire, part compelling history and traces the journeys into the Australian landscape.

Maps, landscape, exploration, the ways we know, or think we know, the places we inhabit and dream about. It’s my favourite literary territory! A couple of quick passage to whet your appetite:

Even the most sublime writers of the Australian landscape know this and populate their country with presences and figures of speech and flights of imagination; with stories, with memories, with anecdotes and episodes, until quiet, empty-seeming land is covered, like a morning sand dune, with a reduplicating set of literary tracks. In my own attempts to describe the inland, I have found it always prudent to have diversions or parallel channels running in the narrative: to be engaged in the routines of driving, perhaps, while one tells one’s story, or to be in conversation, or remembering, or dreaming with one’s eyes open. This is just what one finds in life. One is only very rarely present to a place, fully present, without the engagement of the constantly modulating pressure of the self.

These are some of my ideas about the landscape of the centre and the north: country harsh and hard to survive in, and filled with a beauty and a dignity that give depth to life. The country, though, is not just a made-up thing, constructed, alive with our dreams. It is not just the screen from which we draw our words and thoughts, which we have already busily poured into it. There is a landscape behind the landscape that we are always reaching for and seeking with our eyes and hearts. It is the landscape that is always there, and always receding, and that seems especially well evoked by the Aboriginal conceptual frame of the Tjukurrpa, which is the flash of the present moment and the echo, far off, from primary, long-vanished events.

Can today’s Australians inhabit such landscape? Can we feel at home there? When you find yourself in a pale dune field at sunset, with the sky blush pink and deepest indigo, or when you look out from the crest of an inland mesa at the clouds in their indifferent race across the sky, such questions tend to dissolve, and patterns and thought-chains separate from man’s deliberate kingdom take hold. I have always felt, at such moments, on the verge of dissolution — close to death, as much as on the threshold of new revelations in the march of life — and rather than imposing my will on country, or on landscape, and prolonging the dictatorship of control and consciousness, I am overwhelmed. I am a creature of new rhythm, and the desert, and the inland, are writing me.

The vaguely Italian looking Mornington Peninsula viewed from about 38 miles above, using the GoogleEarth software that allows you to move around a virtual earth, zooming down to some places that are intricately mapped. Almost all my writing is set here.

thinking about poetry
Create a free website or blog at WordPress.com.