I was lucky enough to visit Walden Pond on a trip to the USA over ten years ago now, in a time when travelling overseas seemed a normal thing that one might aspire to. It was a pilgrimage of place, to the place that inspired Thoreau in his life and writing.

I was reminded of all this by this short film I came across, just called Walden, a Ewers Brothers Production with input from Ken Burns and narrated by Robert Redford. I enjoyed it on a rainy late winter morning. You might too.

You can read more about Walden HERE

I suppose I was poetically pre-destined to really like this book: a walking journey up a river from the sea to the source. Local, reflective, meditative, walking as pilgrimage and a creative act.

Maya Ward’s The Comfort of Water traces the Yarra River from Port Phillip Bay to its source up in the mountains; a twenty-one day walking journey that upholds the local as the thing most prized. Yes to that!

And there is lots to like here, the celebration of the place, the recognition of the past in the present (particularly the indigenous connections) and the simple beauty of the concept itself. Start at the sea and start walking upstream until you can go no further.

As the Australian review said:

This book belongs to a genre that runs back through Walt Whitman and Henry David Thoreau in America, and the peripatetic tradition of romantic poetry in Britain. It is seeing a revival, as Mark Tredinnick, author of The Blue Plateau: A Landscape Memoir, suggests in his introduction to this book.

Nature writing, until recently, was associated with a dissenting politics, characterised as a subculture. Now, due to global warming, it seems increasingly mainstream, an ideological avant-garde in the endgame of Western industrial societies.

I’ve written a lot about rivers and streams, they’ve been in my thinking for a long time and in my small way I’ve walked and mapped my local streams in my writing. What disappointed me in the end about the last quarter of this book though was that it became too much about the walkers and not enough about the walk. I liked the natural history, the details of the river itself unwinding through the changing landscape rather than the internal reflecting, theorising and eventually proselytising that took over. There was lots of hand-holding, lots of teary faces and lots of moments of profundity where the place itself seemed to fade into the background a bit as the pilgrims became the story, not the pilgrimage.

Still, a beautiful concept and a really affirming part of that ‘local’ that I think we need to prize more.

You can read more at Maya Ward’s website here

I’ve just begun another promising looking book; Wanderlust by Rebecca Solnit, ‘a history of walking’. Its intention is to trace something of the history of walking, its connection with meditation and creativity, its role with such authors as Aristotle, Rousseau, Thoreau, Baudelaire,  Wordsworth and Coleridge and ‘to create a portrait of the range of possibilities for this most basic act.’  Published by Penguin in Australia.

Just finished reading Gaston Bachelard’s The Poetics of Space, a book that was on my wishlist for a long time, and really enjoyed it. It’s subtitled, ‘the classic look at how we experience intimate places’ and it’s that exploration of space and place, aligned with the prominence of the poetic voice throughout, that really appealed to me.

It’s no walk in the park; it’s classified ‘architecture, philosophy, literature’, but some of the insights are beautiful and profound. I found myself assiduously underlining and circling and annoating, especially in the first half of the book. Some of the things I took down are below:

‘…the joy of reading appears to be the reflection of the ghost of writing, as though the writer were the reader’s ghost’ (xxvi)

‘First of all, as is proper in a study of images of intimacy, we shall pose the  problem of the poetics of the house. The questions abound: how can secret rooms, rooms that have disappeared, become abodes for an unforgettable past?’ (xxxvi)

‘Transcending our memories of all the houses in which we have found shelter, above and beyond all the house we have dreamed we lived in, can we isolate an intimate, concrete essence that would be a justification of the uncommon value of all our images of protected intimacy?’ (3)

‘I should like to give the name of topoanalysis to this auxiliary of psycoanalysis. Topoanalyis, then, would be the systematic psychological study of the sites of our intimate lives’ ( 8 )

‘Despite the fact that we were very close to one another, we remained three isolated individuals, seeing night for the first time’ (RILKE quoted p. 36)

Happily, I also found echoes of a couple of poems of my own at times, explaining something of my interest in house and their lived lives and in the section on the village at night as a collection of stars; ‘that the houses of men become earthly constellations’ (35)

‘And what a great life it would be if, every morning, every object in the house could be made anew by our hands, could “issue” from our hands’ (69)

‘An anthology devoted to small boxes, such as chests and caskets, would constitute an important chapter in psychology’ (81)

‘There is no doubt that Rilke liked locks. But who doesn’t like both locks and keys?’ (84)

‘The well-being I feel, seated in fron of my fire, while bad weather rages out-of-doors, is entirely animal … Well being takes us back to the primitiveness of the refuge.’ (91)

‘There also comes a time when one rejects images that are too naive, and disdains those that have become too hackneyed. Certainly none is more hackneyed than that of the shell house. It is too simple to be elaborated felicitously and too old to be rejuvenated. It says what it has to say in a single world. But the fact remains that is is a primal image as well as an indestructible one.’ (121)

‘The cleverer I am at miniaturizing the world, the better I possess it’ (150)

‘A lake is the landscape’s most beautiful and expressive feature. It is earth’s eye, looking into which the beholder measures the depth of his own nature’ (Thoreau quoted p. 210)

Houses, secret attics and basements, references to Rilke and Thoreau, shells, roads; this book has them all. 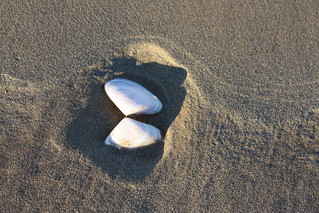